“There is a politics of space as space is politics” 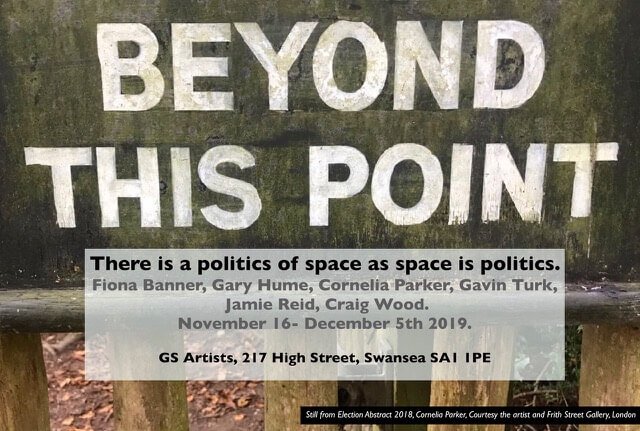 GS Artists is proud to present our new group exhibition  “There is a politics of space as space is politics”.  Continuing our Activism Autumn season, this time our attention focusing  on more established artists and their political comments in art form. The artworks will include the film ‘Election Abstract‘ by Cornelia Parker that she created as the official artist of the last election, yes that one.

Craig Wood’s piece Empire consists of acrylic paint carefully applied to a map of the world to reveal the British Overseas Territories. These modest landmasses are the remains of the British Empire and are indicative of the true power that the uk wields in our contemporary world.

Gary Hume’s Barn Doors and Walls are a series of twenty seven works on paper in oil stick and pencil on paper, depicting the entry points and supporting barriers of the American Dream. Barn raising is celebrated in the US as a collective, community action and the traditional red colour come from the beneficial use of ferrous oxides (to reduce fungal growth and increase retained heat) in what was newly available cheap commercial paint. This colour has now become emblematic. In these works, Hume eschews his usual care in handling his medium. Smudges and bleeding oil seeps cross the lines; finger marks are left on the paper. The works are unsettled and raw.

In Fire Water, 2019,  Gavin Turk’s  work is a constant rediscovering of objects and symbols. The questioning of value, originality and authenticity is the artists process of understanding the real.  The work within this show is an assisted ready-made, where a piece of gold foil, a crumpled chocolate wrapper is inserted into an empty water bottle, creating an agitprop Molotov cocktail.  The title ‘Fire Water’ suggests a strong alcoholic drink that burns the throat.

Fiona Banner, in a recent collaboration with the Archive of Modern Conflict,  commissioned a Magnum photographer to take pictures of London’s financial district as if it was a war zone. The resulting work uses Joseph Conrad’s novel Heart of Darkness as a filter through which to read the tribal behaviour of those in the business of finance, an environment of weary survivalism combining competitive trading floors, corporate art collections, manic drinking cultures, luxury shopping and strip clubs.  Also exhibited are the latest of her works demonstrating a long-standing fascination with the emblem of fighter aircraft and their role within culture, this time printed onto 5 metre pure silk banners, that float and move within the space.

Jamie Reid, infamously and eternally connected with the Sex Pistols and the DIY ethic of punk, Reid grew up in suburban Croydon. After a stint as a semi- professional footballer and gardener Reid honed his ability to communicate directly with a scalpel, glue and a xerox machine in the 70’s. Throughout his career Reid has continued his involvement with important protest movements – No Clause 28, Greenpeace, for the Anti-Poll Tax Alliance, against the Criminal Justice Bill, against English Heritage, Occupy, Pussy Riot and most recently Extinction Rebellion. We are presenting some small agit prop pieces, alongside this new, stunning and direct work concerned with a certain global fast food.

Election Abstract (stills above and below) is an animation of over a thousand original photographs and videos that were posted on Cornelia Parker’s Instagram feed (Electionartist2017) as a personal diary of the election trail and its aftermath. It charts the seemingly forgone conclusion of a Conservative win, the rise and fall of Theresa May and the growing cult of Corbyn. It records travels to various UK cities on the campaign trail, in pursuit of party manifesto launches, debates and public demonstrations. Sometimes Parker acted as part of the press pack, but often worked as a lone observer.

Over the period captured there were multiple terrorist attacks; Westminster, Manchester, London Bridge, Finsbury Park Mosque and immediately after the election, the Grenfell Tower fire disaster. The never-ending news cycle is intercut with pressing issues and anxieties expressed by the public and witnessed by the artist. Commissioned by the Speaker’s Advisory Committee on Works of Art, chaired by Alison McGovern MP

Exhibtion Launch and Talk and Lunch.

On Saturday 16th November at noon, an in-conversation & launch of the  new exhibition took place at Galerie Simpson Artists.

We looked at the last 9 months of XR actions and its relationship with the art world. Has XR had any affect on the way artists are working /wish to work? What changes do we have to make? We will start our journey with Gavin Turk being arrested on Westminster Bridge in April,  to Gary Hume’s request to the National Portrait Gallery to remove BP as a sponsor,  to now and most importantly to the future.  We will talk about the highs and lows of the XR campaign and the central role of art and artists have and must play.

Images courtesy of exhibiting artists. Gallery below by Scott Mackenzie.