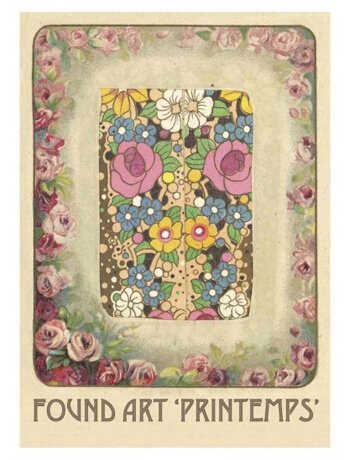 Peter Blake’s delicate screen print is part of his “Found Art” series. Collaged together and embellished by recreating the gold that has faded over time.

Sir Peter Blake  (b. 1932, Dartford, Kent) is a British painter, sculptor, draughtsman and printmaker.  He is known as one of the leading figures of British Pop art. Since graduating from the Royal College of Art in 1956, Blake has appropriated pop culture icons and advertising imagery to create sincere homages to the likes of Marilyn Monroe, Brigitte Bardot, Elvis Presley and professional wrestlers. His iconic 1961 Self-portrait with Badges, in the Tate Collection, shows Blake holding an Elvis album, dressed in American jeans, Converse trainers, and baseball badges; here is the artist as a genuine fan. In other work he composes assemblages of found objects with humorous allusions to the history of art and childhood fantasies. In 1967 he designed the album cover for The Beatles’ Sgt. Pepper’s Lonely Hearts Club Band in his distinctive style of collage.

Blake studied at Gravesend School of Art before being accepted into the Royal College of Art, London, where many of the key British Pop artists, including David Hockney, R. B. Kitaj, Joe Tilson, Allen Jones, Peter Phillips and Derek Boshier, have also studied