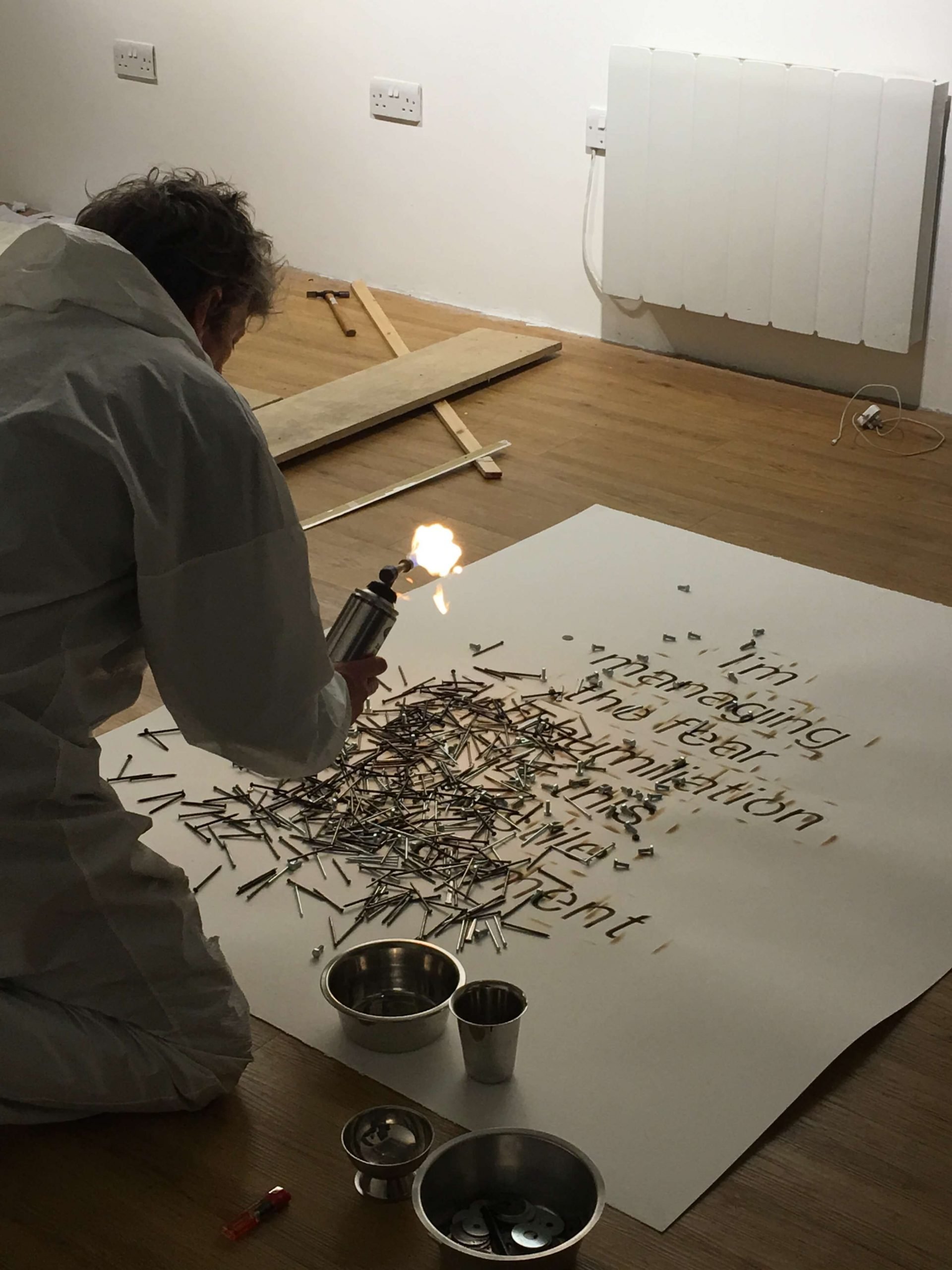 GS Artists are delighted to be hosting the latest in our series of ‘Artist At Work’ residencies. Tim Davies is occupying 217 High Street and creating a new series of works. The residency recognizes the difficulty for professional artists to create new experimental works and so offers the surroundings of the gallery, 24/7 access and the support of the GS team, over a period of 6~8 weeks.

Tim is working on a series entitled ‘Survival is not a crime’ He’s says about the plans for the space – “A few years ago I made a work called “Figures” (One year to heaven) which was a written description of all the photographs used in a broad sheet paper for a whole year. This was done daily from August the 17th of one year to August the 17th of the next and from front page to back (missing out retrospective moments as found in obituaries etc).

I saw this as an alternative portrait of that time – as reliable or unreliable as any other means. I accepted that it was my reading of the images and that it would  vary from person to person – as many times as the image was read (accepting also that the image was ‘taken’ and then selected by another) – but it was a way to witness humans (figures) in various circumstances and their responses to them from global to local and from the banal to the traumatic. This I understood as not just an observation of others but a reflection of ourselves(members of the human race) through a means of empathy or at least an invitation to empathize if at all possible and at whatever level.

By removing the image and describing the scene in words the emphasis was less on the pictorial and more on the figurative, although of course site provides context and so would be noted when relevant.  Occasionally too I would note the words they may have said to a journalist, been overheard or placed on a placard.

These words or quotes I have been looking at more closely for this project – working title ‘Survival is Not a Crime’. This time I have extended my search into online media.  This is an especially disturbing time as the gap between the haves and the have-nots, truth and untruths has widened. I’m collecting the voices of dismay and disbelief”

Tim Davies, is one of Wales’s leading artists, he is primarily an installation artist whose work often derives from environmental or political concerns, working in a range of different materials, including film found imagery and sculpture. He was born and brought up in west Wales. After working and studying in London, Norwich and Canterbury he returned to Wales in 1994. He lives and works in Swansea.