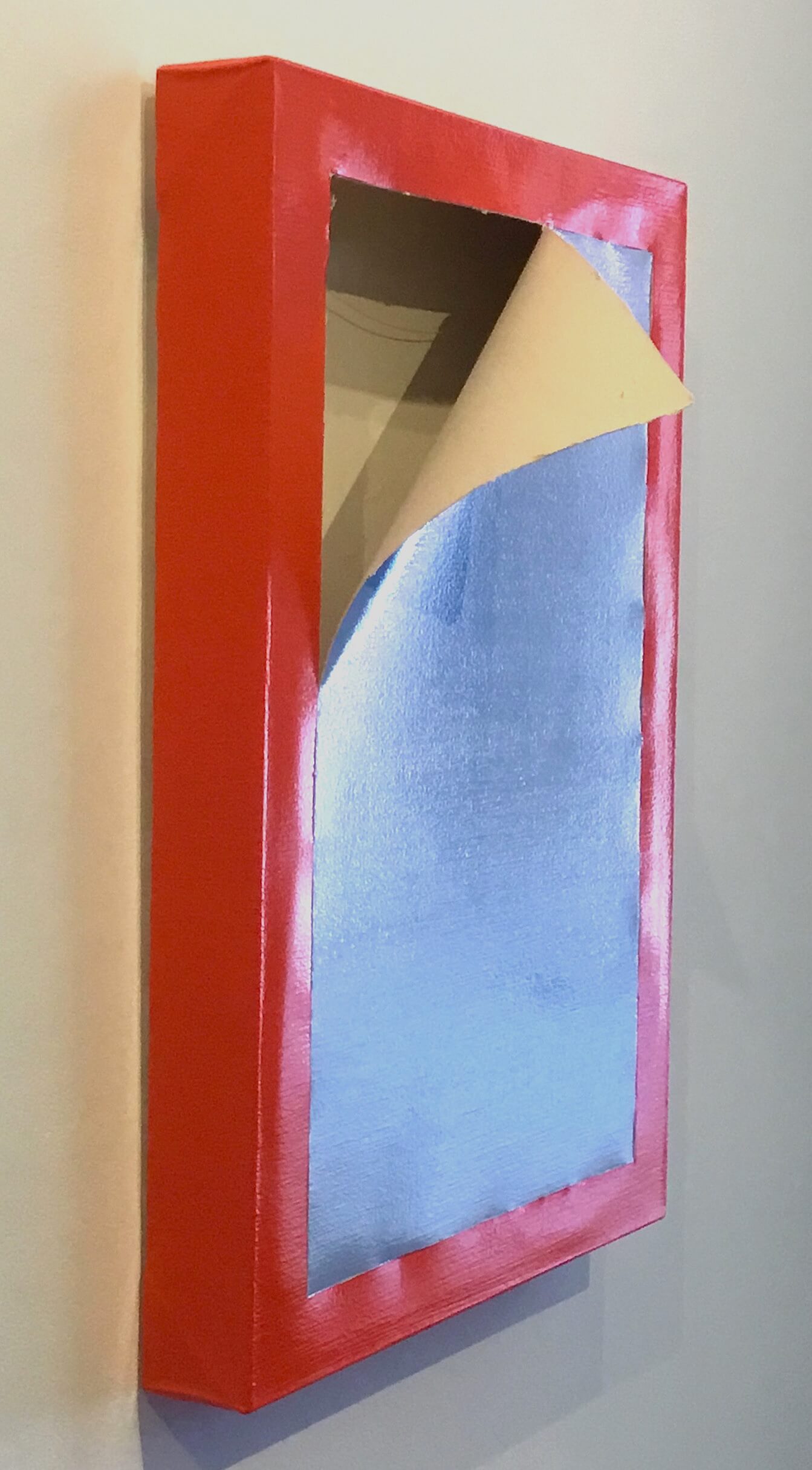 This summer in Swansea, we are bringing together five important contemporary painters in a new exhibition celebrating paint in all its glory.

When choosing a title for a show of 5 painters who are all old enough to know better, it’s no surprise that when we arrived at JOY REVISION, it was pretty unanimous. Perhaps not just about that period of time but maybe its to do with our journey through the purpose of art. Joy, hand in hand with re- vision, reassessing how art has the power to transform. All of the artists involved in the exhibition have been a vital part of the creation of a contemporary art painting history. Angela de la CRUZ, Sarah PICKSTONE, Andreas RUETHI, Anne RYAN, and Stephen SNODDY will present all kinds of painted surfaces.

In discussion with the artists, Anne Ryan said the following “Joy Revision is a great title for a painting show. Painters have an innate understanding of the concept of jouissance, as described by psychoanalysts – a rapturous, excessive, sensual pleasure. This is not just found in the visceral materiality of the medium, but more importantly in the zen-like, empty-headed meditative state – ‘the zone’ – that many painters cite as the optimum state for painting. In working and re-working, stating, erasing and re-stating painters attain the point where all negative thoughts and influences have left the studio and ideally (according to Philip Guston) thepainter has (mentally) left as well” The colour transcends all in many of these works, and that State is evident and addictive for all.

At first glance, Angela de la Cruz’s paintings appear to have been vandalized or flagrantly abused. Mangled stretchers, slashed canvases, twisted and violated, are hung on the wall like macabre trophies, and yet it is this deliberate and systematic desecration of the canvases, which informs the end result. Emotionally raw, yet canny and sharply ironic, De la Cruz confronts the ‘problem’ with painting by incorporating its very destruction into the work itself. Her work for Joy Revision is just a tease. She has meticulously prepared a canvas and then perforated a edge around the painting that she has enjoyed pressing through. Looking at the surface you have to resist the urge to carry on pressing through the perforation, like being confronted with a pile of large bubble wrap and not being able to burst one bubble. 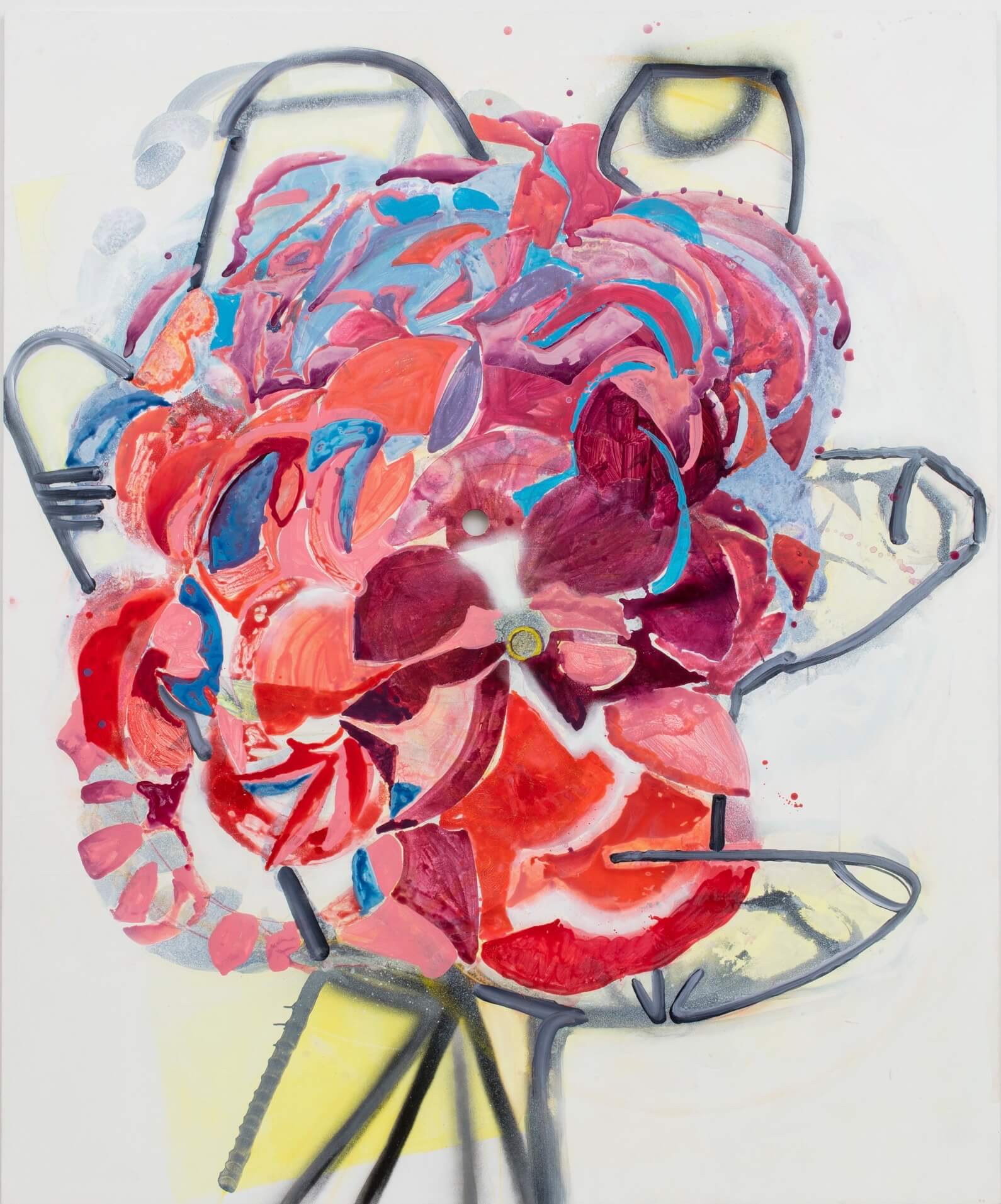 Damascus Rose 2017, by Sarah Pickstone – is a painting about the possibility of renewal. At its base is a line drawing stolen from an outstretched hand in Guernica – painted by Picasso in 1937 and a universal anti -war emblem. In Sarah Pickstone’s painting – a large rose, springs from the palm of the hand – both a symbol of Englishness and a nod to its origins, in Syria and Damascus. It is meant as an image of transformation. 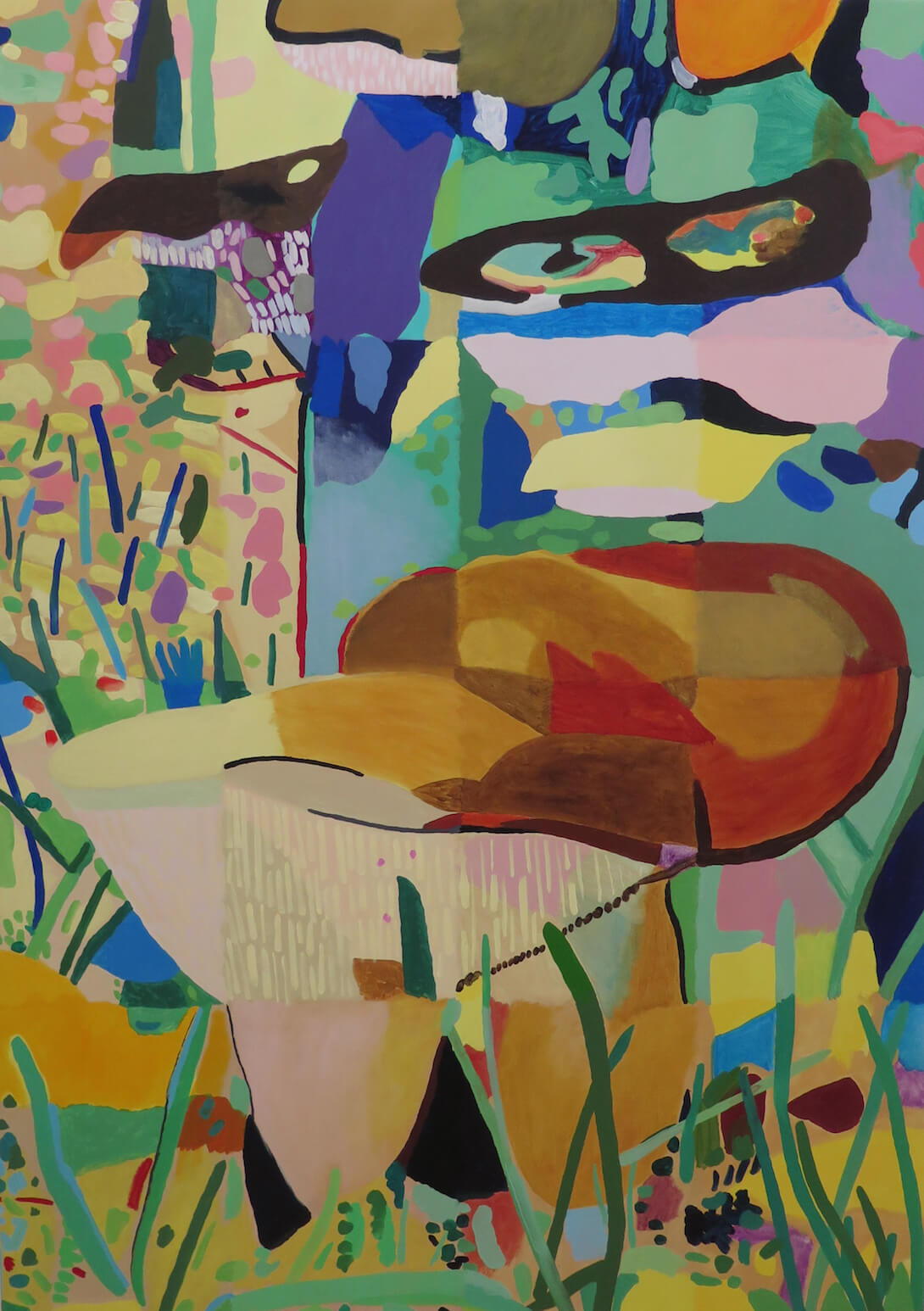 (The Ren and Stimpy song)

Commenting on the word “joy” Beethoven calls to the people:
“Be millions entwined!” And this word will be the language of the artwork of the future. (Richard Wagner on Beethoven’s Ode to Joy) The paintings of Andreas Ruethi celebrate the hallucinogenic power of colour, energizing the viewer in a similar way to listing to music. They investigate new possibilities held within the tradition of painting: playing with the nature of reproduction, imitation, re- presentation and scale. The inspiration for these paintings range from found old colour lithographs, to photographs taken by his wife, artist Helen Sear. The intention to extend the potential held within a reproduction through the act of gesture and reinterpretation is the uniting element across all the works. 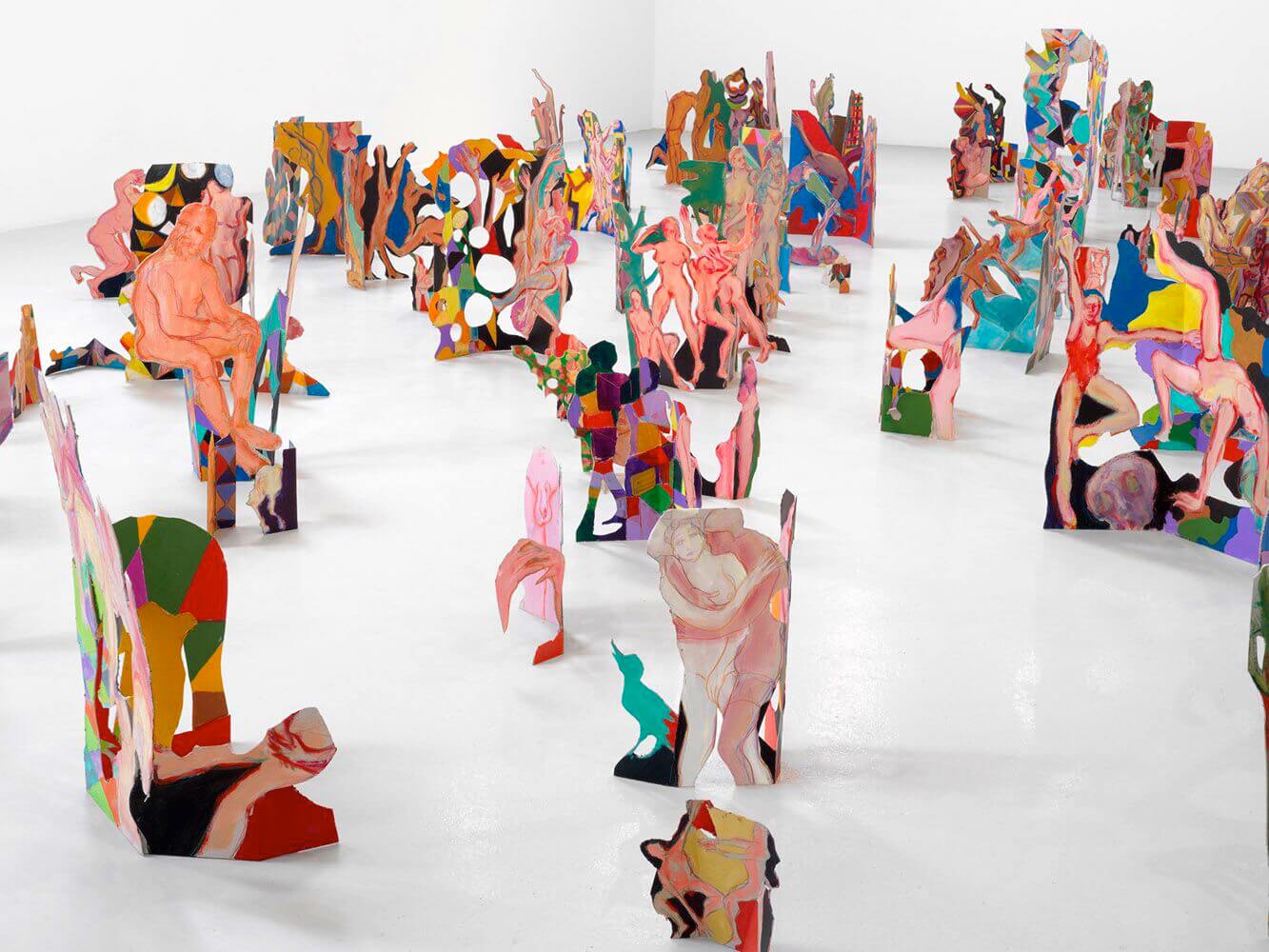 Anne Ryan’s ‘cut outs’ are loose and playful, they are about letting the painting come to life and break free from the stretcher. Her ceramics explore similar themes in a similarly open and painterly way. Using a new medium such as ceramics is interesting as an artist can come to it unaware of the conventions and rules. A whole new way of working and thinking through making becomes suddenly possible. 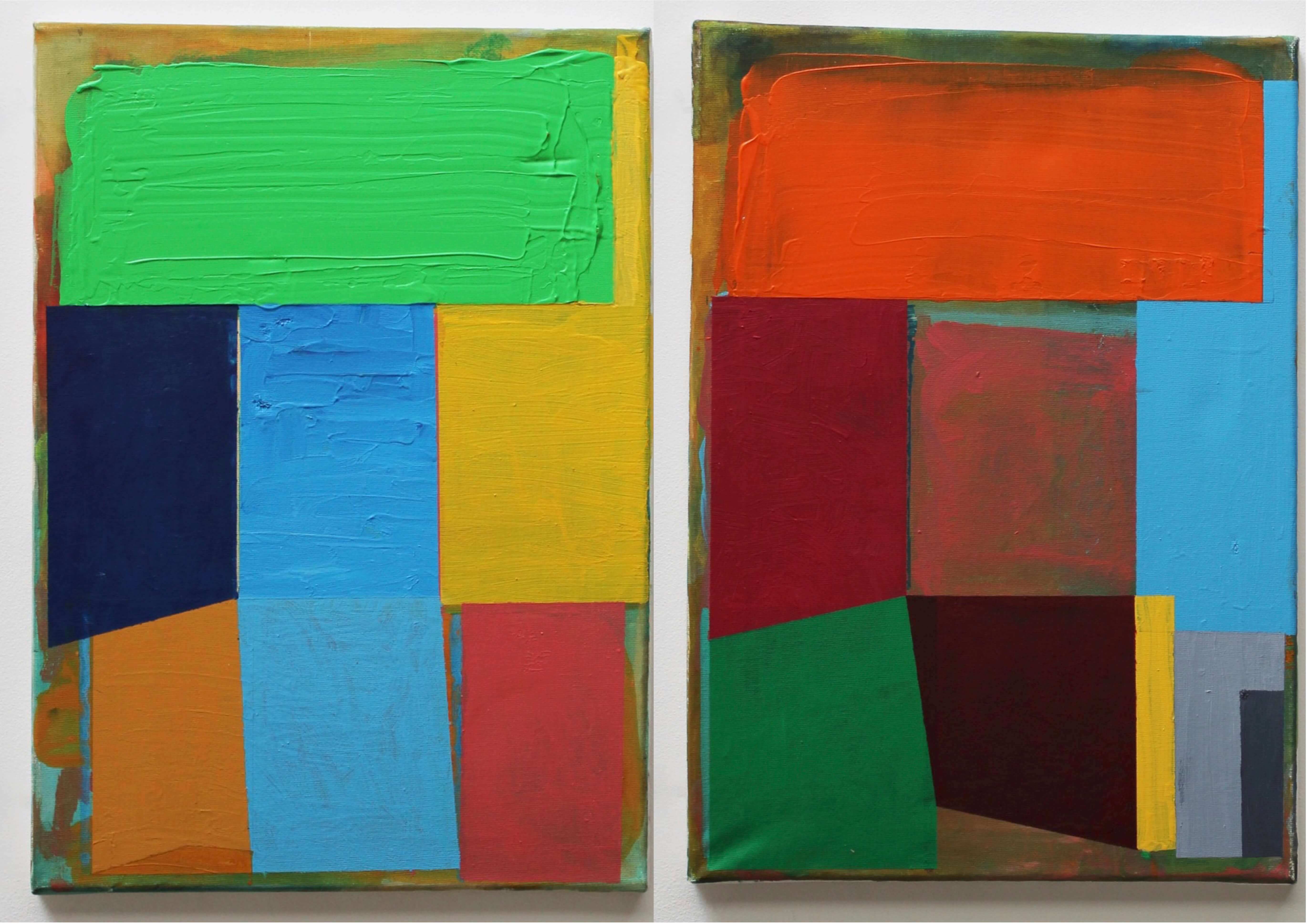 Stephen Snoddy wants viewers to look at the relationships between his works, and how he carries lines and formats from one picture over to another. He sometimes regards two consecutive paintings as a diptych, with left and right-hand panels forming parts of a composite whole. There is an obsessive commitment to playing out endless permutations of specific forms and he goes along with an ontological methodology. The work becomes defined by its geometries, serial approach and limitless variations. ‘The paintings often come in a small series and incorporate architectural and geometric structures with colour to get everything right – space, line, form. The final result is a balanced resolution made through corrections, revisions and re-workings that show a mixture of judgement through the intrinsic process of making. I both pay attention and call attention to the means and alertness of the language of painting and in particular in ‘Homage’ the paintings of Henri Matisse from 1913 -17.’

Angela de la Cruz was born in La Coruña, Spain in 1965 where she studied philosophy at the University of Santiago de Compostela before moving to London where she studied at Chelsea College of Art and later at Goldsmiths College and Slade School of Art. She has exhibited in galleries all over the world including the show entitled “After”, her first solo exhibition in the UK at Camden Arts Centre in April 2010. In May 2010 she was nominated for the Turner Prize.

Manchester born Sarah Pickstone studied Fine Art at the University of Newcastle Upon Tyne, followed by a postgraduate at the Royal Academy of Arts, London. She now works from her studio at Cubitt Studios in central London and teaches at several art schools including the Royal Drawing School. Sarah won the first prize in the John Moores Painting Prize 2012 with her painting Stevie Smith and The Willow, and was also a runner up for the prize in 2004. She won the Rome scholarship in Painting and spent a year at the British School at Rome.

The Royal Academy of Arts has commissioned Allegory of Painting: two large scale paintings for the entrance of Burlington House, as part of RA 250, which will go on display in September 2018.

Andreas Ruethi studied Fine Art in London and Amsterdam. From 2005-2017 he was a Senior Lecturer in Fine Art at the University of South Wales. Since 1996 his work has been exhibited in the UK and internationally.

Anne Ryan was Born in Limerick City, Ireland & attended the Limerick School of Art and Design before moving to Birmingham, England where she completed the M.A. course in Painting at Birmingham School of Art.
In recent years Anne’s work has been exhibited in group and solo exhibitions at venues including greengrassi, London, Kunstlerhaus Mousonturm, Frankfurt, Limerick City Art Gallery, Ireland, CAPC, Bordeaux, France, Lia Rumma, Milan, and The British School at Rome. In 2016 Anne was an Abbey Fellow in Painting at The British School at Rome. She lives and works in London.

Stephen Snoddy was born in Belfast, N. Ireland, He has painted alongside a long and hugely successful career in the arts, with Solo Exhibitions in 2018 at The Old Lock Up Studio, Cromford, Derbyshire and in 2017 ‘Looking At’ at Southampton City Art Gallery and in 2016, Recent Work, Artistsworkhouse, Studley, Warwickshire, “Conversations” Rabley Contemporary, Marlborough and ‘Looking Out’ at the Roberto Polo Gallery, Brussels.

Stephen also has an extensive career within the museums and gallery world. From Exhibitions Organiser at Arnolfini Gallery 1987-91, he worked on an exhibitions with Richard Long, Giuseppe Penone, Gillian Ayres, Rachel Whiteread, Jack B. Yeats and Juan Munoz. Exhibitions Director of Cornerhouse, Manchester, then Director of Southampton City Art Gallery, where he organised the 1998 Chris Ofili solo exhibition which won Chris Ofili the 1998 Turner Prize. In the spring of 1998 he moved to Milton Keynes to direct the construction of a brand new gallery as part of the £30 million Theatre and Gallery complex. Milton Keynes Gallery (MK G). In 2003 he was appointed Director, BALTIC Centre of Contemporary Art, Gateshead then In May 2005 he moved to the The New Art Gallery, Walsall where he is currently Director.