Simon Periton – Your War My Love

SIMON PERITON – ‘YOUR WAR, MY LOVE’

Simon Periton is based in England and graduated from St. Martins School of Art, London in 1990. He has held numerous solo exhibitions and exhibited throughout many European countries and in the United States. Periton has also worked on several commissions and collaborative projects with artists, designers and stylists. He has worked extensively in the public realm on a number of public commissions – Currently a Crossrail commission, for Farringdon Station.

His early works (from 1994) he describes as ‘doilies’, and the subject of his first adventures in paper- cutting was the collision between the familiar lacy, suburban application of his technique – all Victorian repression and twitching curtains and the counter-cultural imagery of his patterns, but this simple opposition soon set off a chain of more subtle associations. Elaborating on the initial theme, Periton has invented an idiosyncratic visual language that’s literally entwined with the intri cate personal mythology it describes, each variation producing a new discovery that feeds back into the procedure of thinking and making. Periton’s work might be an anachronism, but it plays a double game. It might be frail and delicate, materially lightweight, a decent retrospective, would probably fit in a carrier bag – still it’s full of powerful images of oppression and delinquency: the knife that draws the barbs and barricades necessarily the same knife that cuts through them, and the blank-eyed seduction simply a way of drawing you into another web, a new network. (Will Bradley)

“I’d shown some fluorescent pink doilies as part of 21 Days of Darkness at Transmission the previous year. One of these was a length of pink Barbed Wire that hung in the middle of the space from the ceiling and coiled in a heap on the floor. This may have prompted the idea for YWML. I’d been developing an idea of a huge paper piece that encapsulated everything I’d been working on up until that point and thought this might be the occasion to do it. I remember thinking I wanted to make a pair of huge gates rather like Rodin’s The Gates of Hell. Your War My Love was the result. It’s essentially a large collaged image containing thorns, terrorists, Aubrey Beardsley farts, Christopher Dresser fronds, doily shield bearing police charging rioters/protesters, assorted punk stuff, brick walls, a few cats, some eyes. It all radiates out from four central phallic images. It also operated as a kind of Rorschach test. People were constantly telling me they could see something I knew I hadn’t put in.

When we installed it at the South London Gallery, the artist Fiona Banner told me it was the scariest piece of work she’d seen as it looked so fragile. Lots of local children would come in to look at the piece hence some of the footprints still on the bottom!

We will also be showing a couple of Periton’s reverse glass paintings. He developed these more recently, utilising the myriad of paper stencils that his doilies had produced. In the same way that the doilies were about a penetrated/cut surface, the reverse glass paintings are similarly concerned with a surface albeit a hard and impenetrable one.

These glass paintings sit on special brackets that hold them away from the wall. Decoy is from a series of paintings based on photographs that Periton had recently discovered in an old family album that showed his great grandfather who was a Captain in Bedfordshire regiment during WW1 and experienced the Angel at Mons. Apparently, his experience was so strong that when he returned after the war, he converted to Catholicism.

Your War My Love is proud to be an official part of the Now For More mini festival of events and shows 21st Sept- 29th, accompanying the Now The Hero immersive theatrical event devised by artist Marc Rees for a 14-18 NOW commission. Simon’s work is also present in the “On Paper” Arts Council Collection Touring Exhibition opening on the same night at the Glynn Vivian Art Gallery.

This summer in Swansea, we are bringing together five important contemporary painters in a new exhibition celebrating paint in all its glory.

When choosing a title for a show of 5 painters who are all old enough to know better, it’s no surprise that when we arrived at JOY REVISION, it was pretty unanimous. Perhaps not just about that period of time but maybe its to do with our journey through the purpose of art. Joy, hand in hand with re- vision, reassessing how art has the power to transform. All of the artists involved in the exhibition have been a vital part of the creation of a contemporary art painting history. Angela de la CRUZ, Sarah PICKSTONE, Andreas RUETHI, Anne RYAN, and Stephen SNODDY will present all kinds of painted surfaces.

In discussion with the artists, Anne Ryan said the following “Joy Revision is a great title for a painting show. Painters have an innate understanding of the concept of jouissance, as described by psychoanalysts – a rapturous, excessive, sensual pleasure. This is not just found in the visceral materiality of the medium, but more importantly in the zen-like, empty-headed meditative state – ‘the zone’ – that many painters cite as the optimum state for painting. In working and re-working, stating, erasing and re-stating painters attain the point where all negative thoughts and influences have left the studio and ideally (according to Philip Guston) the painter  has (mentally) left as well” The colour transcends all in many of these works, and that State is evident and addictive for all. (The Ren and Stimpy song)

Commenting on the word “joy” Beethoven calls to the people:

“Be millions entwined!” And this word will be the language of the artwork of the future. (Richard Wagner on Beethoven’s Ode to Joy)

The paintings of Andreas Ruethi celebrate the hallucinogenic power of colour, energizing the viewer in a similar way to listing to music. They investigate new possibilities held within the tradition of painting: playing with the nature of reproduction, imitation, re-presentation and scale. The inspiration for these paintings range from found old colour lithographs, to photographs taken by his wife, artist Helen Sear. The intention to extend the potential held within a reproduction through the act of gesture and reinterpretation is the uniting element across all the works. 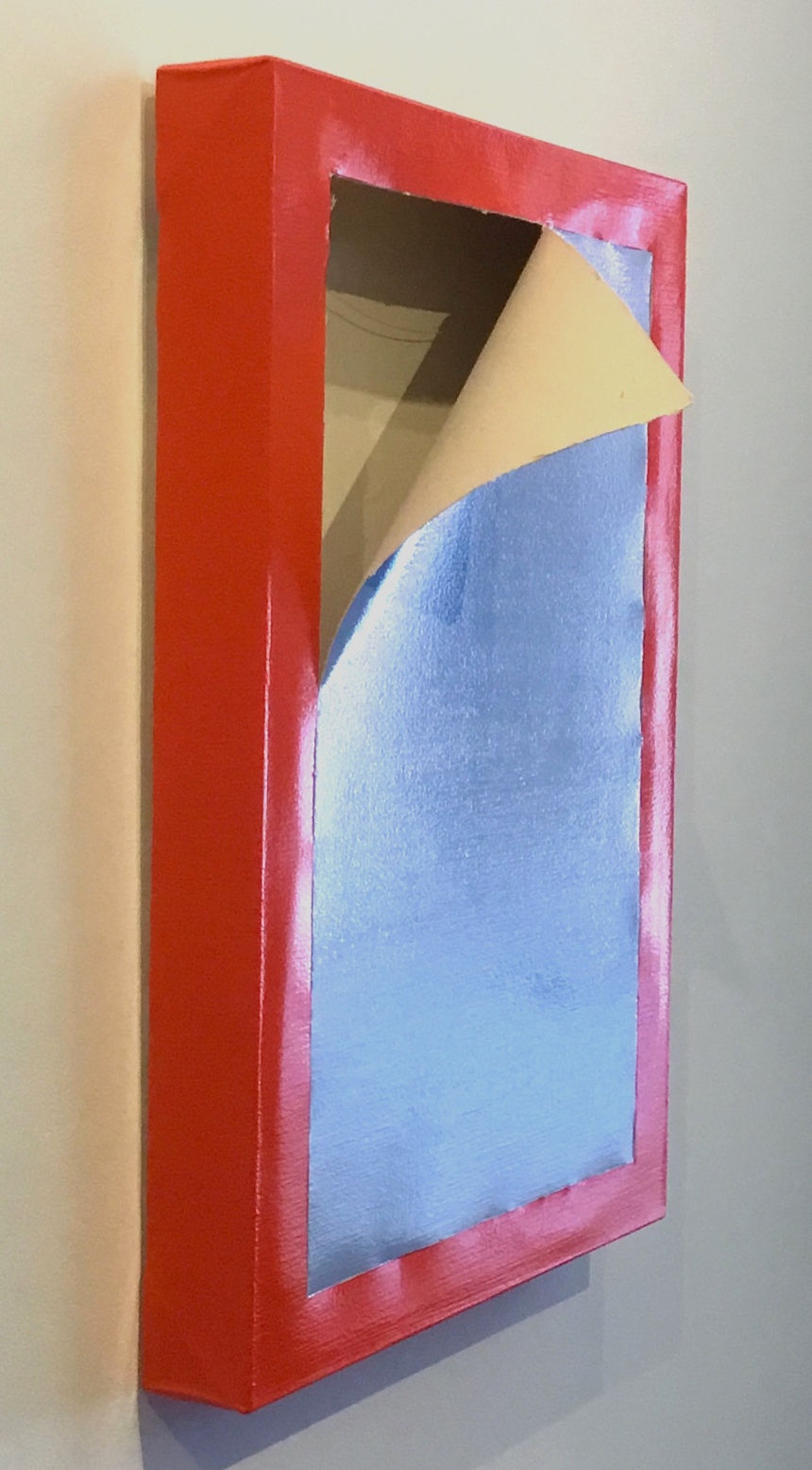 At first glance, Angela de la Cruz’s paintings appear to have been vandalized or flagrantly abused. Mangled stretchers, slashed canvases, twisted and violated, are hung on the wall like macabre trophies, and yet it is this deliberate and systematic desecration of the canvases, which informs the end result. Emotionally raw, yet canny and sharply ironic, De la Cruz confronts the ‘problem’ with painting by incorporating its very destruction into the work itself. Her work for Joy Revision is just a tease. She has meticulously prepared a canvas and then perforated a edge around the painting that she has enjoyed pressing through. Looking at the surface you have to resist the urge to carry on pressing through the perforation, like being confronted with a pile of large bubble wrap and not being able to burst one bubble. 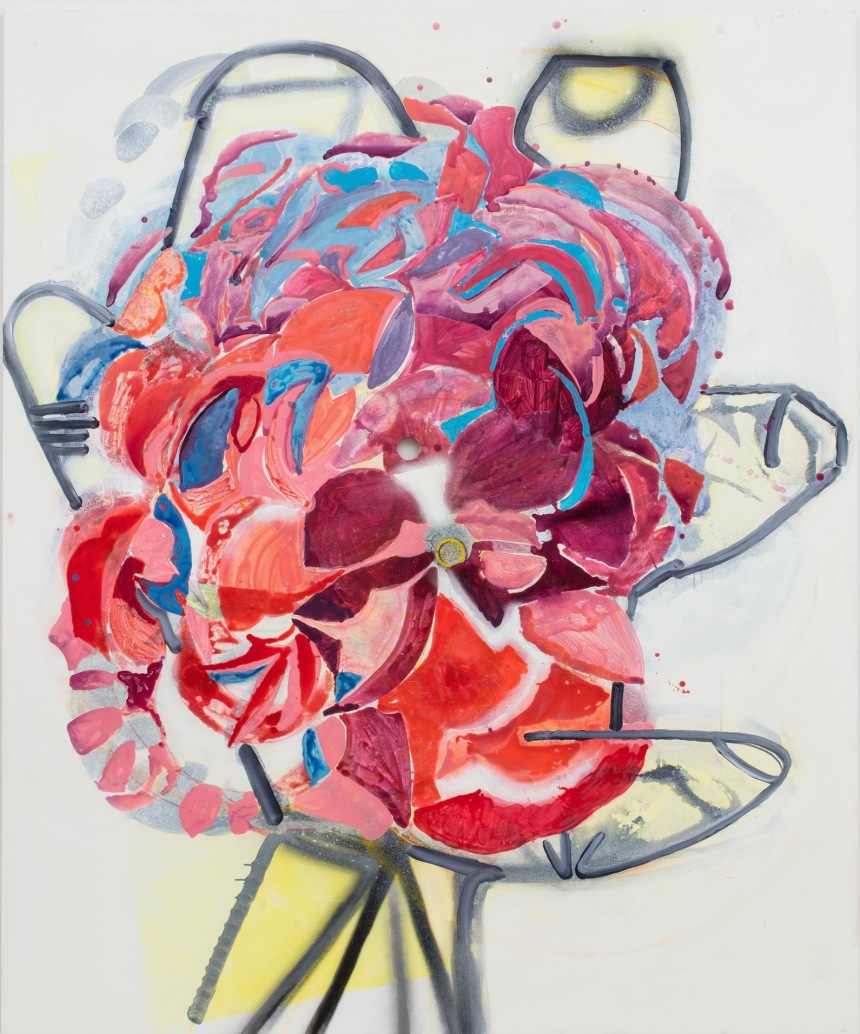 Damascus Rose 2017, by Sarah Pickstone – is a painting about the possibility of renewal. At its base is a line drawing stolen from an outstretched hand in Guernica – painted by Picasso in 1937 and a universal anti -war emblem. In Sarah Pickstone’s painting – a large rose, springs from the palm of the hand – both a symbol of Englishness and a nod to its origins, in Syria and Damascus. It is meant as an image of transformation.

Anne Ryan’s ‘cut outs’ are loose and playful, they are about letting the painting come to life and break free from the stretcher. Her ceramics explore similar themes in a similarly open and painterly way. Using a new medium such as ceramics is interesting as an artist can come to it unaware of the conventions and rules. A whole new way of working and thinking through making becomes suddenly possible.

Stephen Snoddy wants viewers to look at the relationships between his works, and how he carries lines and formats from one picture over to another. He sometimes regards two consecutive paintings as a diptych, with left and right-hand panels forming parts of a composite whole. There is an obsessive commitment to playing out endless permutations of specific forms and he goes along with an ontological methodology. The work becomes defined by its geometries, serial approach and limitless variations. ‘The paintings often come in a small series and incorporate architectural and geometric structures with colour to get everything right – space, line, form. The final result is a balanced resolution made through corrections, revisions and re-workings that show a mixture of judgement through the intrinsic process of making. I both pay attention and call attention to the means and alertness of the language of painting and in particular in ‘Homage’ the paintings of Henri Matisse from 1913 -17.’

Hone brings together a collection of both old and new works in clay by the artist Judith Rees.

Her work reveals the beauty within the disposable, the humble and the unloved by transposing her source material into enduring ceramic form and presenting it within the context of a fine art gallery.

Rees’ work is domestic in scale yet their quiet, monochrome compositions invite an expansive form of consideration.

The show continues to February 3rd 2018. 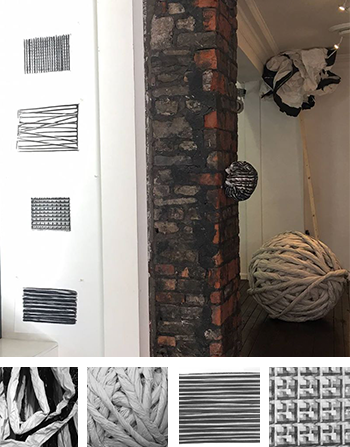 Johnson Soliz has been working in a High Street Shop (number 217)  for the past month, creating a new body of work specifically for the former shop and for Galerie Simpson itself.

The work from the Cardiff-based artist explores the silent language of human gestures through the medium of sculpture and drawing, building on Johnson Soliz’s ongoing fascination with these forms of expression.

“Simple, common physical gestures are fascinating and thought provoking. I am drawn to noticing these and am inspired by them,” she says.

Soliz was born in Germany and grew up in Merced in the San Joaquin Valley in California. She also lived in Mexico, Bolivia, Brazil, Italy and Ghana before moving to Cardiff in 1975 to study on the Foundation course for one year at Cardiff College of Art. She later completed a B.A. and M.A. in Fine Art at Goldsmiths’ College, London, where she lived for 20 years.

She returned to Cardiff as the Henry Moore Fellow in Sculpture at Cardiff School of Art & Design (1995-1997). She was Senior Lecturer and more recently, Head of Fine Art and Programme Leader in Sculpture at CSAD until July 2011. From 2013-2014 she was a recipient of a Major Creative Wales Award from the Arts Council of Wales.

Cecile is the well deserved recipient of the 2017 National Eisteddfod Gold Medal for Fine Art.