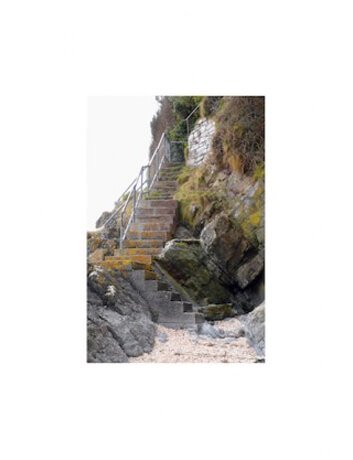 This is a photograph of a concrete staircase on Llansteffan Beach in South Wales in 2012. Rachel has worked with staircases for many years, taking photographs, moulding and casting, culminating in large sculptural forms.

Whiteread is one of Britain’s leading contemporary sculptors. Born in London in 1963, she studied painting at Brighton Polytechnic from 1982–85 and sculpture at the Slade School of Fine Art from 1985–87. She shot to public attention in 1993 with her sculpture, “House,” a life-sized replica of the interior of a condemned terraced house in London’s East End which provoked intense public debate until it was eventually demolished in 1994. She won the Turner Prize in 1993.

Over the last decade she has developed a significant international reputation, creating major public works in both Europe and the United States. Her winning proposal for the Holocaust memorial at the Judenplatz in Vienna was one of the most prestigious sculptural commissions in Europe in the 1990s. This piece involved placing the cast interior of a library, including imprints from the books on their shelves, into the centre of the square. It was unveiled in October 2000. She represented the UK at the 1997 Venice Biennale and created “Monument” for the empty plinth in Trafalgar Square in 2001.