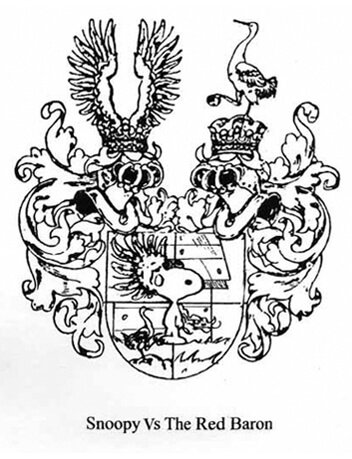 SNOOPY VS THE RED BARRON

Snoopy is the star character in Charles M.Schulz’s comic strip, Peanuts. As well as being a pet beagle and an aspiring novelist, Snoopy is a World War I flying ace. In this latter incarnation he wants to both become the Red Baron, and kill him. The Baron however, exists only in his mind: a heroicised representation of fear.  In The complete text of Snoopy’s Novel the image of Snoopy appears in the centre of The Baron’s Family crest. Behind this is the absurd, hubristic text of Snoopy’s novel.

The title of this series references the 1966 pop hit Snoopy Vs The Red Baron. Shortly after The Baron first appeared in Schultz’s cartoon, the Florida based band The Royal Guardsmen, released their song and Snoopy’s owners promptly sued.  In 2012 banner staged a performance of Snoopy Vs The Red Baron in The Welsh Chapel, London.

In this work the image and words are somehow defiled. They allude to the acts of unmaking and destruction, as much as the creative act, examining how we mythologize ourselves and our histories and how we are seduced by the myths of our own creation. Banner references the combative relations not only between Snoopy and his nemeses, but also the heavy handed copyright issues surrounding creative ownership.