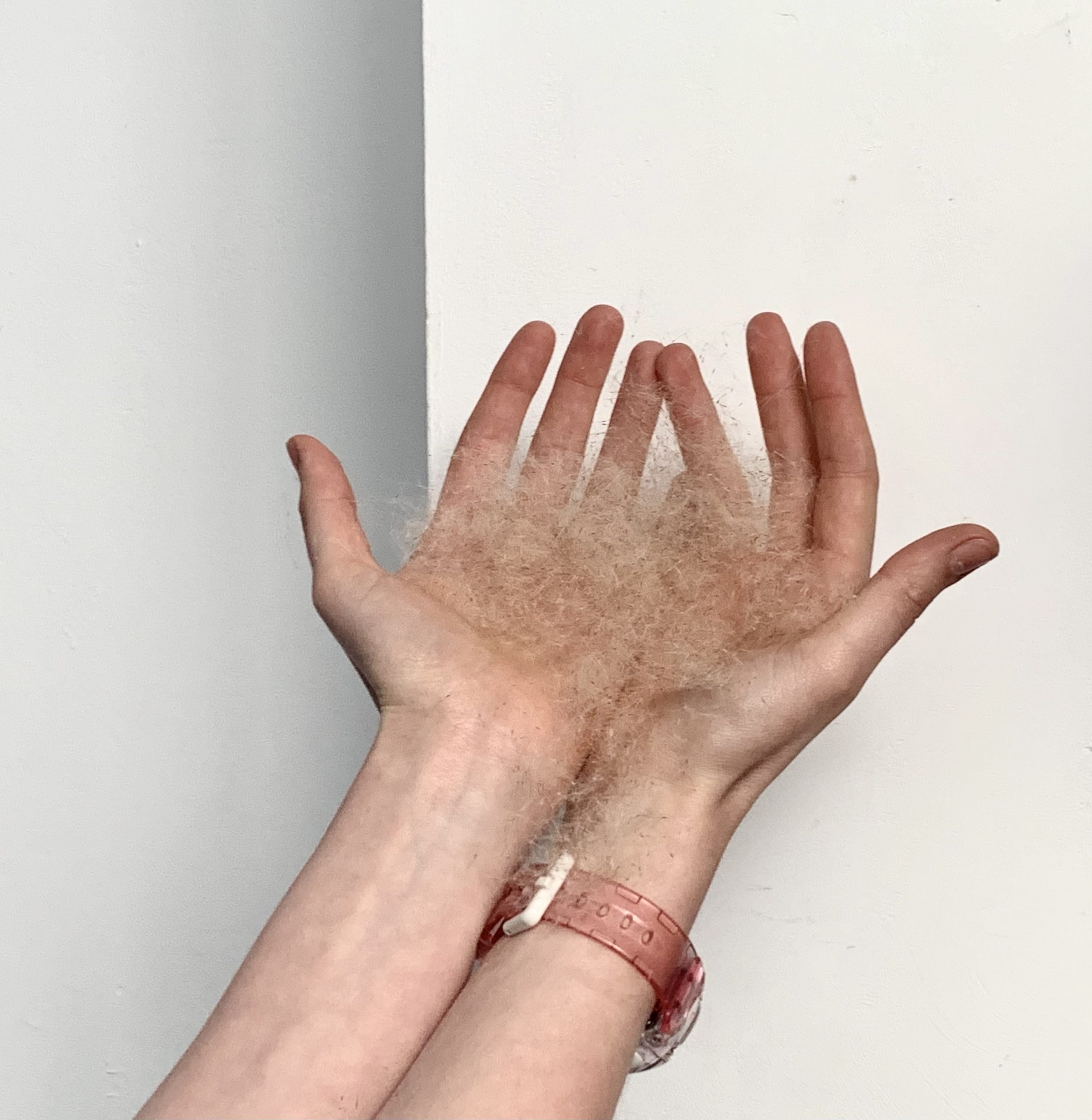 TW– Nice to see you too.

AS-So my first question will be, what are three keywords that would describe your practice?

TW-I would say gender is number one at the moment, then meditation, and finally, props.

AS-Who has had an influence on your practice? Is there a favourite quote?

TW-Saburo Murakami has been a significant influence on me. He is a Japanese artist and was part of the Gutai group. It was his performance work, ‘passing through’, which was big for me. I re-found it when I was living in Japan, it took on a lot more meaning for me at that point. He had a huge influence on my practice over the last four years. He uses a lot of punk energy and violence in his performances. He also does photography documentation of his performances. They really struck a chord with me. They were really beautifully done: gorgeous black and white images capturing physicality and movement really well. I think he had a huge influence on my practice. I don’t have a quote from him; not really a quote kind of person, although ride or die is sticking at the moment.

I think the Gutai group is a fascinating group of artists who have melted lots of different art disciplines together. They were a multi-disciplinary group that really had a keen focus on performance. So they have been very influential for me over the last couple of years.

AS-What ideas do you want viewers to engage with through your artwork?

TW-It would be nice if people got a chance to think about representation and had a space to think about the different forms we have, with the focus being gender. I want my work to spark questions about how things are perceived and how we take so many things for granted. I want them to reflect on the indoctrinated ideas of how people should behave because they are born into a particular body.

AS-What are the obstacles you face in the production of your art practice?

I would say that, at the moment, I am struggling with which set of rules to stick with to create my performances. Because I work across disciplines within my work, I cannot see the dead end. Sometimes I find it quite challenging to figure out what rules to use to finish a piece of work. I work with writing, props, performance, and photography and sometimes, I find that it is an obstacle having too much going on.

AS-To whom do you go for help when you hit a block or have difficulties in your creative process?

TW-My friend Alkmini Gousiari. She is an artist and a dear friend based in Glasgow. A lot of the time, I do speak to my creative community when I hit blocks, especially if I have got a sensitive project.

Recently I have been asked to do quite a few response works to other people’s artwork. I think this is a bit of a trend since coming out of lockdown for people to ask artists who do live work to respond to things that are more static.

And yes, Alkmini is definitely somebody I go to when I have a block. She always gives me just the most on-point advice. We have very similar ways of thinking, and she’s a very grounded person when it comes to how she describes what I do, which is really helpful.

Sometimes I think you get caught up in your own brain, and you kind of forget ‘your kind of you’. You forget your ground basic themes and ideologies, and when you speak to somebody who knows your work so well as a friend, they can say: ‘’ Oh, well, you don’t need to worry about that because your work sort of out of home anyway, isn’t it because your body is home.’’ or something like that.

Oh, and nature. I’d say that’s probably the other thing I go to when I hit a block. It is definitely something that helps me to unwind ideas and gives me space to think about things.

Also, I have been trying to develop a body of work about my relationship to rurality and how that is a really important part of my process. So yeah, I’d say nature as well is something that I go to when I have a block.

AS-Apart from being an artist, what other jobs have you done?

Lots of lots of different things

AS-What new skills have you needed to learn for this particular artwork or performance?

A big part of this residency will focus on developing scores to help make performance. Trying to tackle the block that we mentioned previously in the question of what stops me from making work.

So in this residency, I’m going to try and focus on creating more methods that are ‘go to methods’ to make things; to make performances.  I guess the skill that I’m going to be honing in is writing scores. I think that’s a skill I really need to learn to help me narrow the amount of possibilities to make work.

AS-In your creative process, do you look into research outside of the art world?

Yes. A lot of my research comes from psychology. I like to look into different methods that psychologists use to figure out things about humankind. And from that, I get quite a lot of inspiration for the sculptural elements, my performance works, or props that I use in my performance work.

I also have a bit of an obsession with researching, like job roles that either men or women have in society. I then use all of the props and the movements from those roles. So I guess there is a sociological element.

I do a lot of research into nature, plants, animals. I look into the movement phenomena of rivers and land movement. So there’s more research going to come from that side of things as I look into my relationship with the land.

AS-In what area outside the art world would you like to collaborate in the future?

Most projects that I’m working on are to do with safety and pleasure. There are also links to Welsh history, paganism, land and queerness. All the themes tie in with my obsession with duality.

As part of one of those projects, I’ll be working with Cadw, an ancient burial site on Anglesey in North Wales. So I will be going there, working with the land. That’s more like collaboration with historical human existence.

I have often dreamt about collaborating with a construction team.

I would love to make work with builders.

This kind of fascination started when I was studying. It was all about representation and fascination with a difference.

It’s a highly male-dominated job role and something that is essential to our existence. There is a lot of this kind of work in this area.

And it’s also a lot to do with safety—the very old fashioned idea of men taking the role of ‘protector’.

I am exploring the dynamic between somebody who’s a young, born female, artist trying to have those conversations with people who work in that industry and seeing where it could go and how it could be turned into something.

There is also aesthetically something just unbelievable about roadworks and the way that they work; where they create these kinds of portals into the ground beneath us into this highly constructed world that we live. Like right now, we are walking next to a massive river in Swansea, but we’re next to all these new kind of prefab houses and this concrete pathway. And there’s just something beautiful about when you see that construction taking place and how the landscape is changing. I think there’s some kind of colour to it. And it’s also me being quite inquisitive. I’m trying to think about things, maybe in a little bit more of a romantic way.

So yeah, that’s maybe something that has crossed my mind quite a few times. But there is also another element of it that I thought could be quite beautiful. When I was living in Scotland, there was free to join a construction course for Women. They were trying to change this gender gap. Coming back here, I found out that Chwarae Teg, a charity trying to create gender equality, has lots of courses that help get young women into these kinds of jobs. I thought maybe, having conversations with that demographic of people about these kinds of roles would be really interesting.

Interviews have taken up quite a big part of my research in the past. I use interviews with people as a basis to develop my performances.

AS-Could you describe the role of art in the future in three words or phrases?

And – Crucial, I think, because we’re going through a really, really tough time. We really need to hold on to creativity as just a form of expression. Maybe not the art world because it’s pretty dire, more like… just creativity as a crucial way to survive.

I feel like that’s kind of how I’m trying to look at being an artist right now. It feels absolutely necessary to stay creative and hold on to your creativity rather than the old concept of being an artist, which feels a bit… obsolete and unsustainable.

AS–Thank you, Tess. That was amazing.

TW-Thank you, Anja, lovely walking and talking with you.